Are the woods around Quincy, Massachusetts a hot bed of Bigfoot activity? Is the image in the photo to the left the remains of a Sasquatch, or a bear paw?

For the time being, no one know's for sure. All they know is it's definitely not human. 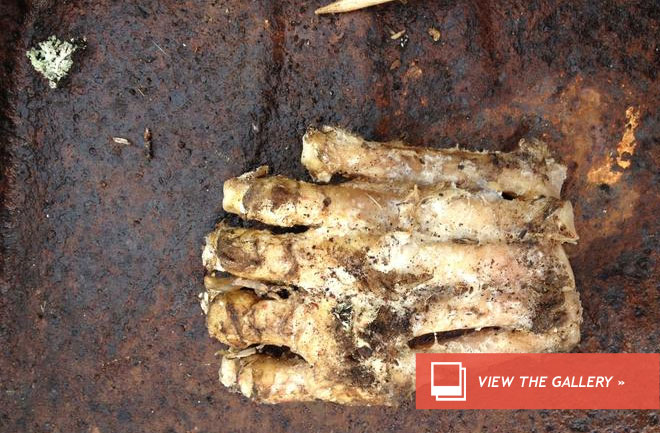 You can read the Discovery Channel report on it by clicking here.

We are reporting on this story for two reasons. One is that it's paranormal news. The other is to discuss the "image" problem bigfoot, cryptozoology and especially people who report encounters end up having in the press.

It seems sometimes that mainstream media will take any kind of news or claim with the bigfoot name attached to it, and use it to sell papers or get viewers. It also goes a long way towards discrediting the creature.

Mainstream media has a long history of mocking claims of bigfoot encounters, and any research into cryptozoology in general. Sometimes, as is the case in this YouTube clip, it manifests in the incredulous tone of voice the reporter uses.

Here is a link to the original Provo Canyon Bigfoot video, and a link to the phone interview that was done by Max Roth of Fox 13 News. The person giving the interview about the encounter does not want their name published as he doesn't want to be harassed. However, he is careful not to say that they saw a bigfoot. He states a few times that bigfoot investigators are looking into the video, but he is not sure of what he has seen.

We want to be clear that we are not convinced that a large primate type creature known as  bigfoot or Sasquatch actually exists. However, we do not think it is an impossible idea. Like everything else we do with this website, we want to present as much information as is possible so that you can make up your own mind.

Provo Canyon is located in the state of Utah.